The Boston Terrier is one of the few breeds of dogs that originates from the United States of America, although they owe a little of their ancestry to the British Bulldog, the breed actually came into being in the late nineteenth century in the eastern states of America. His short, square muzzle identifies him as a ‘Bull breed’ and his small erect ears combined with his well defined colouring add to his smart appearance. Dapper and classy, he is a real eye-catcher when out and about and due to the Boston Terrier's markings resembling formal wear, in addition to its refined and pleasant personality, the breed is commonly referred to as the "American Gentleman." The Boston is derived from original pit fighting dogs and is one of the few breeds ‘made in the USA’. It was in 1893 that a mix of bull and terrier types finally produced the first pair of dogs which were to become the foundation of the Boston Terrier. 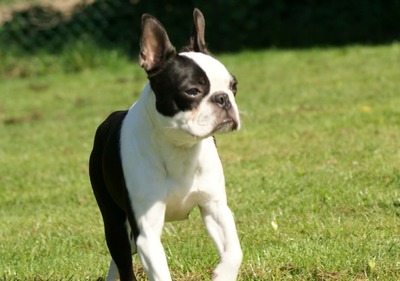 The Boston Terrier is a highly intelligent dog but can sometimes be determined and self willed. They need training which needs to be approached in a firm but gentle manor to ensure that they do not develop unwanted habits. They do very well in Obedience, Agility, Flyball, and Therapy work. Typical physical traits include a smooth coat, and both a short head and tail resulting in a balanced compact build. Colouring is primarily brindle, seal or black in colour and evenly marked with white. The head is in proportion to the size of the dog and the expression indicates a high degree of intelligence. Boston Terriers are typically small, compactly built, well proportioned dogs with erect ears, short tails, and a short muzzle that should be free of wrinkles.

They usually have a square sort of face. Ideally, white should cover its chest, muzzle, band around the neck, half way up the forelegs, up to the hocks on the rear legs, and a white blaze between but not touching the eyes. According to the international breed standard, the dog should weigh no less than 4.5KG (10 pounds) and no more than 11.5KG (25 pounds). Boston Terriers usually stand 12-17 inches at the withers.
Boston’s are a nice small to medium size breed which is comfortable to have around house. Even though they are small, they will bark to let their family know if someone is at the door, but tend only to bark when necessary. Although it is always good to remember each dog is an individual and some will bark more than others. Boston’s are known for their affectionate nature and sunny disposition. The Boston Terrier is intelligent, enthusiastic, affectionate and playful. They get along well with other pets, dogs, and children. Boston’s have an excellent disposition and a high degree of intelligence, which makes them an incomparable companion. 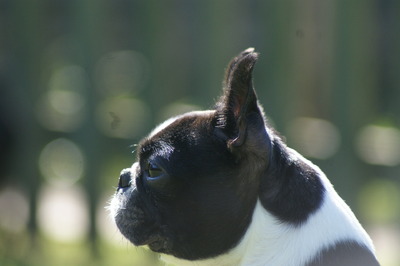 Boston Terriers have strong, friendly personalities. But can range in temperaments from those that are eager to please their master to those that are more stubborn. Both can be easily trained given a patient and assertive owner. Having been bred as a companion dog, they enjoy being around people, and, if properly socialized, get along well with children, the elderly, other canines, and non-canine pets making them ideal family pets.
You are able to view the profiles and  pedigrees of our breeding dogs by visiting our Boston Terrier Boys and our Boston Terrier Girls pages.
Occaionally, for various reasons, we have older dogs available for re-homing.  Any dogs we have available are listed below - you will also find some brief history about them and the type of home they require by clicking on their profile page. If you feel you may be a suitable match for one of our advertised older dogs then please use our Client Questionnaire to contact us to find out more about our re-homing process.